The History of Modern Refractive Surgery

An ESCRS Heritage Lecture delivered by Patrick Condon MCh, FRCS, FRCOphth at last year’s annual ESCRS Congress in Amsterdam—and now viewable on YouTube—takes viewers through the earliest 19th-century experiments in refractive surgery up to the present day, outlining the successes and failures of the pioneering innovators of this continually evolving specialty. In an interview with EuroTimes Contributing Editor Roibeárd O’hÉineacháin, Dr Condon shared his recollections of his experiences during this revolutionary era of ophthalmology.

I first became involved with the European Intraocular Implant Club in the 1980s when Cornelius Binkhorst invited me to be the Irish representative on the board. During the subsequent 10 years, I became extremely friendly with role models Harold Ridley, Peter Choyce, and many others in lens implant surgery and watched the many top surgeons participate in surgery.

My first interest in refractive surgery began while treating advanced cases of keratoconus. In the early days, it could only be treated with a specialised type of contact lenses—many of which were extremely difficult for patients to wear and produced vectorisation of the cornea. For these cases, epikeratoplasty—originally pioneered by José Barraquer in Bogota and subsequently Herbert Kaufman and Marguerite McDonald in the US—seemed to be the answer. The failure of this technique for these patients stimulated Jörg Krumeich—who I would consider another role model—to use his guided trephine system (GTS) for nonfrozen donor corneas. It initially worked well for epikeratoplasty and corneal transplant work, which we were doing a lot of in Waterford at the time.

Because of the difficulties of using the Barraquer microkeratome for the refractive procedures for myopia, Lucio Buratto used the Summit laser in 1989 to perform the refractive cut on the posterior surface of the excised corneal button. That same year, Ioannis Pallikaris introduced the technique of using a hinged corneal flap and applying the laser to the stromal bed. Lucio Buratto spent three months in Dublin with Michael O’Keefe and myself, discussing these developments, as well as with Pallikaris—who also visited us regarding the development of his aberrometer for measuring corneal topography.

By 1990, although stromal bed ablation technique was acceptable practice, there was still the problem with the Barraquer microkeratome. This was where Luis Ruiz in Bogota came into the picture with the development of his automatic corneal shaper (ACS) and the automatic lamellar keratoplasty technique. Having met Ruiz personally at courses in the US organised by Charles Casebier, I paid a visit to Dr Ruiz’s clinic in Bogota, where I watched him operate and examine his patients postoperatively. I subsequently purchased a microkeratome from a company in Florida, US. At my hospital in Waterford, Ireland, the manager at the time allowed me to set up a wet laboratory to practice using the microkeratome on pig eyes to perfect the technique.

This then led to combining the use of the ACS with the Summit laser Michael O’Keefe was using for PRK at the Mater Hospital. And in Dublin, at the end of 1993, we performed the first LASIK procedure in the UK and Ireland on a patient with high myopia. With my deep involvement with the ESCRS at the time, Lucio Buratto and I started the European lamellar keratoplasty group in Gothenburg in 1994. Our aim was to train doctors beginning to use the microkeratome to get involved in refractive surgery.

WHAT DOES THE FUTURE HOLD?

Where refractive surgery goes from now on is a good question. There is no doubt the changes brought about by femtosecond laser technology has changed the pattern of intracorneal surgery. My video illustrates the therapeutic uses as well as its use in refractive surgery (particularly small incision lenticule extraction, or SMILE)—an indication of the success of these changes.

The parallel development and perfection of the implantable collamer lens (ICL) has been a major advance in refractive surgery, especially when looking back at Svyatoslav Fyodorov’s original design. The amazing improvements in the ICL technology provide a real alternative to corneal laser refractive surgery.

One of the main challenges for refractive surgeons is to avoid becoming too casual about these procedures, as many of them are irreversible and may result in further problems. For the future, the ESCRS will continue to highlight advances in refractive surgery, encourage further research, and maintain standards of practice with wet labs and courses—as they are already doing very successfully.

Patrick Condon MCh, FRCS, FRCOphth lives in Waterford, Ireland. During his long career, Dr Condon acquired Fellowships from the Royal Colleges of Surgeons of Ireland, England, and Scotland and a Mastership in Surgery (National University of Ireland). He is currently a life fellow of the Royal Society of Medicine (London), an emeritus member of the International Intraocular Implant Club, and an active member of the Royal Academy of Medicine in Ireland and the Irish College of Ophthalmologists. pcondon251@eircom.net 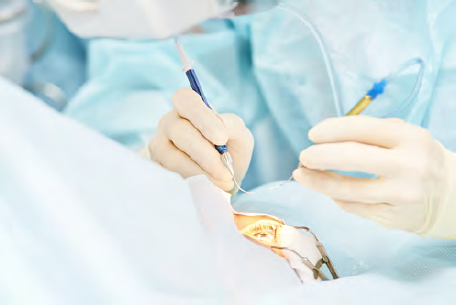