Comorbid glaucoma is associated with an increased likelihood of refractive surprise after uncomplicated cataract surgery, according to a retrospective cohort study conducted by researchers at the University of Washington, Seattle, US.

The analysis included 483 controls without glaucoma and 194 glaucomatous eyes and found significantly higher proportions of controls compared to glaucoma patients achieved a refractive outcome within 1.0 D of target (96% vs. 92%) and within 0.5 D of target (72% vs. 66%).

“Our study excluded those with ocular comorbidities and potential confounding factors. We are continuing to investigate the issue, including trying to identify specific differences in eyes with glaucoma that might underly refractive errors. Nevertheless, we think our findings could provide important information for preoperative patient counselling as well as represent a risk-to-benefit ratio consideration for any cataract surgeon.”

The single-centre study identified the first qualifying eye of patients with uncomplicated phacoemulsification cataract surgery without any other concurrent eye surgery from 2007 to 2020. The glaucoma group included only eyes with a definite glaucoma diagnosis. Glaucoma suspects and eyes with ocular hypertension were excluded, as were eyes with any vision-limiting systemic disease, retinal or corneal disease, or prior ocular surgery. The study used the Barrett Universal II calculator to calculate the estimated refractive outcome based on the preoperative ocular biometry and the intraocular lens implanted at the time of surgery.

Researchers then compared postoperative month-one refractions to the estimated refractions.

The percentage of eyes with preoperative CDVA of 20/40 or better was not significantly different in the glaucoma and nonglaucoma groups (95% vs. 97%). Corresponding with the difference found in the refractive outcomes, mean postoperative CDVA was worse in the glaucoma group compared to controls (0.06 vs. 0.02 logMAR), and the difference was statistically significant.

The glaucoma cohort included 94 eyes with primary openangle glaucoma, 47 eyes with normal-tension glaucoma, 27 eyes with chronic angle-closure glaucoma (CACG), and 18 eyes with pseudoexfoliation glaucoma. Analyses of refractive outcomes for the different glaucoma subtypes showed refractive surprises were most common for eyes with CACG—38% of eyes with this diagnosis had a myopic surprise >0.5 D.
The investigators postulated that some biometric factor could explain their findings.

“Comparing regression lines for plots of the ratio of anterior chamber depth to axial length against the magnitude of refractive surprise, we see a statistically significant difference between the glaucoma and control groups, suggesting the refractive outcome differences may be based on biometric factors,” Mr Huang said. However, biometric values in and of themselves did not correlate with refractive surprises. This is an area of further investigation.

Mr Huang presented these findings at ARVO 2022 in Denver, Colorado, US.

Johnson Huang BS is a medical student at the University of Washington, US. huangc85@uw.edu

Andrew Chen MD is an assistant professor in the Department of Ophthalmology at the University of Washington, US. achen20@uw.edu

Philip P Chen is the Grace E Hill Chair professor in the Department of Ophthalmology at the University of Washington, US. pchen@uw.edu 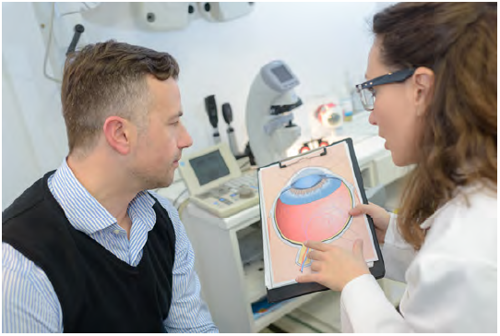