Recent surveys of attitudes towards operating room waste show a clear consensus among ESCRS members and colleagues in North America about their concern for global warming and the amount of trash produced by cataract surgery as excessive. Furthermore, a majority in both surveys is willing to reuse many pharmaceutical and surgical supplies, reported Sjoerd Elferink MD.

“In the absence of evidence to the contrary, surgeons should have more discretion over this reuse,” said Dr Elferink. “Following the example of a recently released North American multisociety position statement on reusing multidose topical medications and through collaboration with industry, our profession can take major strides towards reducing surgical waste.”

Issued by the American Society of Cataract and Refractive Surgery (ASCRS), American Academy of Ophthalmology, American Glaucoma Society, and Outpatient Ophthalmic Surgery Society, the joint position statement recommends surgical facilities be permitted to use topical drugs in multidose containers on multiple patients until the manufacturer’s labelled date of expiration (if proper guidelines are followed).

Dr Elferink summarised the responses to the Operating Room (OR) Waste Survey sent to ESCRS members and, earlier, to cataract surgeons belonging to various professional societies in North America. The online survey—designed by the US Ophthalmic Instrument Cleaning and Sterilization Task Force—consisted of 23 multiple choice questions, prefaced with information about the carbon footprint of cataract surgery in the United Kingdom versus the Aravind Eye Care System in India.

A total of 458 ESCRS members completed the online survey, of whom 77% practiced in Europe. The North American survey group comprised 1,241 respondents. In both groups, nearly 40% of respondents were “high volume” surgeons performing more than 500 procedures per year, but the proportion practicing in a hospital was twice as high in the ESCRS cohort than the North American group (68% versus 33%).

The responses from both survey groups showed overwhelming concern about global warming, with 99% of ESCRS respondents and 91% of North American respondents expressing concern. In addition, more than 90% of surgeons in both groups believe the amount of waste produced during cataract surgery is excessive, and nearly all respondents agree about the need to seek ways to reduce surgical waste. The proportion of surgeons wanting medical societies to advocate for reducing the environmental impact of ophthalmic surgery was higher in the ESCRS group than in the North American cohort (94% versus 87%).

Responses to questions about drivers of waste generation showed the two survey groups agreed on some factors. Perceived safety benefits of disposable items were identified by about three-fourths of both the ESCRS and North American surgeons, and slightly higher percentages of respondents in both groups felt manufacturers pushing the market towards more profitable single-use products had a role.

The North Americans were more likely than the ESCRS members to believe hospital and facility policies were creating more OR waste because of the necessity to use disposable items (74% versus 58%). Nearly all respondents in both groups (≥92%) agreed that manufacturers should offer more reusable instruments and supplies.

Responses to questions about current sustainable practice patterns showed some differences between surgeons on the two continents but were similar in indicating willingness to consider various measures. Multidose containers of various drug types (mydriatics, antibiotics, NSAIDs, anaesthetics, and IOP-lowering medications) were used by 32% to 43% of the ESCRS surgeons and at slightly higher rates among the North Americans. Both groups showed willingness to consider using more multidose products.

There was a greater difference between the two survey cohorts in current use of multidose intraocular pharmaceuticals (antibiotics, lidocaine, alpha agonist/mydriatics, capsular dyes) with the ESCRS members more likely to use these products (up to 48%). On the other hand, willingness to consider multidose intraocular pharmaceuticals was much higher among the North Americans (up to 80%).

Almost half of the respondents in both groups reuse appropriately cleaned and sterilised supply items (phaco and irrigation/aspiration tips). Reusing other supply items such as tubing, metal blades, and nonmetal surgical devices (e.g., pupil expansion rings, iris, and capsule retractors) was limited among surgeons in both survey groups, as was the use of an open BSS bottle for more than one patient. However, the survey participants indicated a high willingness to consider these practices and other measures for minimising surgical waste—i.e., eliminating full body drapes and hospital gowns for patients and using the same surgical mask and surgical gown all day.

In addition, almost half of the surgeons in both cohorts showed willingness to consider immediate sequential bilateral cataract surgery. “Sequential bilateral surgery has positive consequences for decreasing transport and carbon dioxide emissions from travel, but it is not being done a lot now,” Dr Elferink said.

Dr Elferink also encouraged his colleagues to visit the website EyeSustain (eyesustain.org). Sponsored by the ESCRS and the ASCRS, EyeSustain was created with the mission of making healthcare delivery and services in ophthalmology more sustainable environmentally and economically. 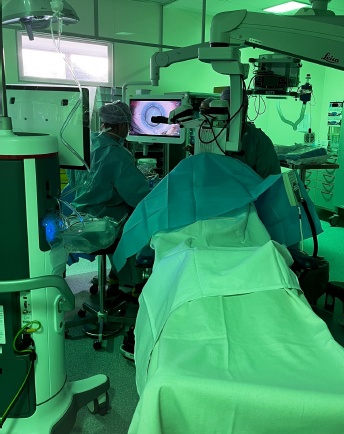 40th Congress of the ESCRS